Am I introverted, socially phobic or just shy? 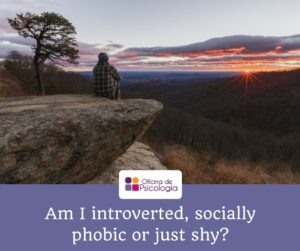 When concepts have things in common, they also tend to get mixed and lost in their genesis somewhere in everyone’s mouth.  This leads to several misconceptions and incorrect information being spread across our society, especially nowadays with the global world wide web. A common misunderstanding is usually present between social phobia, shyness and introversion. Well, not anymore! I will explain what each one is, what do they have in common and what are their differences.

Introversion is a personality trait. Introverted people have a higher interest in their own internal world, their thoughts and feelings, and are usually happy to spend time alone. Actually, most of them need it as a self-care tool, as much as extroverted need social time to recharge batteries for instance.

In contrast, social phobia is a mental health disorder based on a perceived irrational and exaggerated fear in social situations. A person suffering with social phobia is usually interested in social situations, however, their fears of being judge by others or embarrassing themselves leads them to avoid social interactions or facing them with significant distress. They are usual overly conscious people, perfectionist, and have this constant feeling of being “put on the spot” in social interactions. This distress needs to be significant to impact in several areas of their lives. It is not hard to imagine that someone struggling with social phobia will have extreme difficulties initiating and/or maintaining relationships, increasing their likehood of being socially isolated. From here to mood disorders is fast like a fuse to a firework. It may be a little harder to think how social phobia may affect your future goals… but it does. How? Well, think about choosing a University degree or a professional career pathway. If I am social phobic, will I choose a career involving a lot of social interactions like public relations, politician, management, etc.? Probably not. However, do not be mistaken, as social phobia can vary in intensity and forms: some people only struggle with social situations where they will be the focus of attention – performance type – while others will struggle more by just interacting with others. Severe forms of social phobia may have both forms present.

And last, but not the least… Shyness is a bulk of uncomfortable feelings such as awkwardness, stress and worry when interacting with unfamiliar people. Shyness overlaps introversion and social phobia as you can find it present in both introverted people and in those struggling with social phobia. Still confused?? Well, let me put it this way… Introversion and social phobia are the two opposite slices of bread, while shyness is the cheese that is linked with both bread slices. Being shy can, sometimes, be the first stepping stone towards the development of social phobia but is not a pre requisite. At the same time, an introverted may be shy when facing unfamiliar social situations and this does not necessarily means he suffers from social phobia.

Children’s presentation of social phobia may vary a little according to their different developmental stages. Due to developmentally appropriate diminished self-awareness, young children usually can only describe several physical symptoms, are extremely clingy in social situations, refuse to participate in social or school activities and do not tend to speak when meeting new people. Middle school age children, as they are acquiring more self-consciousness, can say things like “I expect bad things to happen” or “others are looking at me while I am eating” or “others are saying bad things about me”. Teenagers, are usually very hard on themselves and much more self-critic, thus, will often avoid eye contact, or struggle at an academic level (which can lead to school truancy), have difficulties dating and in some cases start at-risk type of behaviours, such as alcohol and drugs experimentation, as a coping mechanism for their anxiety.

Well, whether you are an adult with this constant feeling of being “put on the spot”, or you have a child who is displaying some of the above symptoms, I can tell you that the more you avoid it, the worst it gets! So start today by taking control of the steering wheel of your social phobia so that you can learn to park it somewhere and never look back! Talk to us, we can join you in these driving lessons J 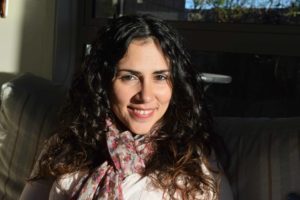